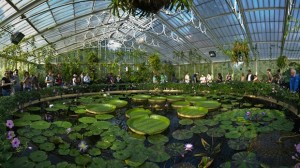 During the middle and late 1800s, cities became the hotspots for opportunity. They also created a longing for the outdoors, much as they still do today. With great foresight, many city planners created parks and botanical gardens to preserve native plants and provide a space of respite from the hustle of city life.

The US has several gorgeous gardens across the land, and many of them can trace their origins back to American industrialization. Here are three of our favorites.

New York’s botanical garden is an impressive collection that spans 240 acres of land. 50 collections of flowers are housed there, and the land has a serene waterfall cascading over its ground, as well as untouched old-grown New York forest. The space also houses the Pfizer Research lab, which was paid for by a grant from the National Oceanic and Atmospheric Administration.

The Bronx River divides the forest, running almost directly through it, and that river is the only fresh water body to naturally flow within the boundaries of New York City. If you’re feeling adventurous, you can even find rapids there.

San Francisco’s Conservatory of Flowers is nestled in Golden Gate Park, which is already a beautiful place. It was constructed from a kit of South American plants imported by an eccentric real estate investor named James Lick. Lick wanted to build a grand mansion and surround himself in jungle plants, but he died before it was completed. San Francisco acquired the rights to the kit and used it to built a refuge from the hubbub of the city. Today, the Conservatory houses more than 1,700 species of plants, including an exotic and unnerving collection of poisonous plants of historical significance.

Options for Tax Free Property Investments in Grand Cayman 14 May , 2015